In October 1976 Colorado authorities charged Bundy with Caryn Campbell’s murder and was transferred to Aspen in January 1977.

On June 7th, he was transferred to Pitkin County Courthouse in Aspen for a preliminary hearing. Since he was representing himself, the judge excused him from having to wear the handcuffs or leg irons usually worn by defendants. During a recess he asked to visit the courthouse’s law library to research his case.

Bundy concealed himself behind a bookcase and jumped from the second story window. Roadblocks were set up on its outskirts of Aspen but Bundy stayed within them and then hiked into the Aspen Mountains. Bundy broke into a hunting cabin and stole food, clothing, and a rifle and continued south but became lost in the forest.

On June 13th Bundy stole a car at the edge of Aspen Golf Course, but this point Bundy was cold, sleep-deprived, and in constant pain from his sprained ankle (from jumping out the window). He drove back into Aspen where he was spotted by two police officers who noticed his car weaving in and out of its lane and pulled him over. He had been a fugitive for six days.

Despite the fact the case against him was weak at best and was deteriorating steadily and that he stood a good chance of acquittal this wouldn’t stop Bundy from devising a new escape plan. He acquired a detailed floor plan of the jail, a hacksaw blade (from other inmates) and accumulated $500 in cash (over time from various visitors).

Bundy used the hacksaw to saw a hole in the ceiling that led to a crawl space and (after losing 35 pounds) was able to wriggle through it. 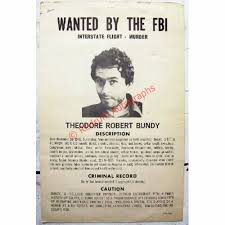 In the weeks that followed he made several practice runs in order to exploring the jail. On December 30th he squeezed into his hole and used the crawl space to reach the chief jailer’s apartment. Finding the apartment empty, Bundy changed into some of his clothes and walked out the door.

Bundy ended up in Tallahassee, Florida where he intended to lay low, believing he could stay in Florida and escape detection however this didn’t last long.

State University campus. He bludgeoned and then strangled her as she slept. Her body was found at the scene.

January 15th 1978: Lisa Levy (20) – Also at the Chi Omega sorority house. She was bludgeoned, bitten, strangled and sexually assaulted as she slept Her body was also found at the scene.

January 15th 1978: Karen Chandler (21) – Bludgeoned as she slept at the Chi Omega sorority house. She survived.

January 15th 1978: Kathy Kleiner (21) – Bludgeoned as she slept at the Chi Omega sorority house. She survived.

January 15th 1978: Cheryl Thomas (21) – From the Chi Omega House Bundy travelled eight blocks and broke into Thomas’ basement apartment and bludgeoned her as she slept. She also survived.

February 8th 1978: Leslie Parmenter (14) – Parmenter (the daughter of Jacksonville Police Department’s Chief of Detectives) was approached by Bundy in a parking lot in Jacksonville, Florida. Bundy identified himself as a member of the Fire Department but he fled when Parmenter’s older brother arrived. A lucky escape.

Four days after killing Leach, Bundy stole car and decided fled Florida. He was behind on his rent, he was on the FBI’s Ten Most Wanted List, and he thought th 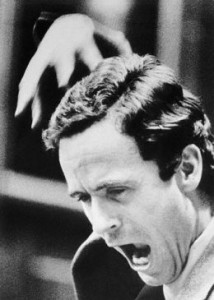 at the police were closing in. He was pulled over at the Alabama state line by Florida police officer, David Lee after a random check told the officer the car was stolen.

Bundy wasn’t too keen on being captured again. He fought the cop and ran but was tackled where the officer finally subdued and arrested Bundy. Not know who he had arrested Lee he heard Bundy say, “I wish you had killed me.”

In June 1979 Bundy stood trial for the Chi Omega assaults and murders. Once again he opted to defend himself despite the fact he had 5 court-appointed attorneys. Being arrested wouldn’t stop Bundy from stroking his own ego. The trial was a worldwide media sensation and the first to be televised nationally in the US….. and Bundy loved it!!

The bite marks left on Lisa Levy (one of the Chi Omega victims) were matched to Bundy’s teeth and it was more than enough evidence to convict him. He received 2 sentences of death in the electric chair. 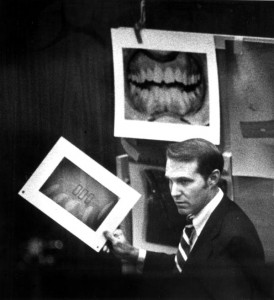 In January 1980, he was tried for the murder of Kimberly Leach. Despite hiring 2 attorneys this time believing they could help get him off he was found guilty and received another death sentence.

Bundy soon hired a new lawyer and began to appeal the convictions but it was all in vain. With his appeals exhausted Bundy switched tactics and began confessing to murders the police had not connected him to hoping for a stay of execution. However this tactic didn’t work.

Bundy was executed in the electric chair just after 7am January 24th 1989. 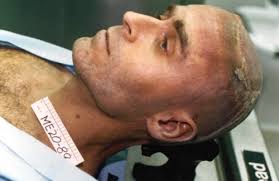 Bundy remains the suspect in several unsolved homicides, and is likely responsible for others that will never be identified.

Bundy said that there were some murders that he would never talk about because they were committed “too close to home”, “too close to family”, or involved “victims who were very young”

August 31st 1961: Ann Marie Burr (8) – Burr vanished from her Tacoma home which was on Bundy’s paper route when Bundy was 14. The victim’s father was certain that he saw Bundy in a ditch at a construction site on the nearby campus the morning his daughter disappeared. Other circumstantial evidence implicates him as well. Forensic testing of material evidence from the Burr crime scene, in 2011 produced insufficient intact DNA. Bundy repeatedly denied killing her and wrote this in a letter to the Burr family in 1986. She has never been found.

June 23rd 1966: Lisa E. Wick (20) & Lonnie Trumbull (20) – Both were bludgeoned with a piece of lumber as they slept in their basement apartment in Seattle’s Queen Anne Hill district. Bundy worked at the nearby store where the women regularly shopped. Trumbull was killed and Wick suffered permanent memory loss. Wick has said “I know that it was Ted Bundy who did that to us,” however she stated “but I can’t tell you how I know.” The case remains officially unsolved.

May 30th 1969: Susan Davis (19) & Elizabeth Perry (19) – The college friends were stabbed to death while on vacation. Their car was found abandoned beside the near Somers Point, New Jersey and their bodies were found in nearby woods three days later. Bundy has said that his first murder victims were two women in the Philadelphia area but his accounts do vary. Bundy’s aunt claimed he was wearing a leg cast due to a car accident on the weekend of the homicides, and therefore could not have travelled from Philadelphia to New Jersey. However there is no official record of any such accident so this could have been his 1st use of the cast ruse. Bundy is considered a “strong suspect”, but the case remains officially unsolved.

July 19th 1971: Rita Curran (24) – The elementary school teacher (and part-time motel maid) was strangled, bludgeoned and raped in her basement apartment in Burlington, Vermont. The location of the motel where she worked was adjacent to Bundy’s birthplace (possibly he was confirming his parentage?) No evidence firmly places Bundy in Burlington on that date but Bundy’s whereabouts are unaccounted for around that time. The Curran’s murder remains officially unsolved.

July 22nd 1971: Joyce LePage (21) – LePage was last seen on the campus of Washington State University where she was an undergraduate. 9 months later her skeletal remains were found wrapped in carpeting and military blankets, bound with rope, in a deep ravine south of Pullman Washington. According to investigators Bundy has never been cleared as a suspect and LePage’s murder remains officially unsolved.

June 29th 1973: Rita Lorraine Jolly (17) & August 20th 1973: Vicki Lynn Hollar (24 )– Jolly disappeared from West Linn, Oregon and Hollar disappeared from Eugene, Oregon. Bundy confessed to 2 murders in Oregon without identifying the victims. Oregon detectives suspected that they were Jolly and Hollar, but were unable to obtain interview time with Bundy to confirm it. Both women remain classified as missing.

May 27th 1974: Brenda Joy Baker (14) – Baker was last seen hitch-hiking near Puyallup, Washington and her body was found in Millersylvania State Park a month later. Though Bundy was widely believed responsible for her murder but it remains unsolved.

July 1st 1974: Sandra Jean Weaver (19) – Weaver was last seen at her job in Salt Lake City, Utah. Her nude body was discovered the following day near Grand Junction, Colorado, she had been strangled. It is not confirmed if Bundy mentioned Weaver’s name during the death row interviews. Her murder remains unsolved .

August 2nd 1974: Carol L. Valenzuela (20) & September 1st 1974: Martha Morrison (17) – Valenzuela was last seen hitch-hiking near Vancouver, Washington and Morrison was last seen in Eugene, Oregon. Both of their remains were discovered two months later in a shallow grave south of Olympia, Washington. Both victims had long hair parted in the middle (Bundy’s preferred type). In August 1974 Bundy drove from Seattle to Salt Lake City and could have passed through Vancouver and Eugene en route, but there is no evidence that he did. Both cases remain unsolved.

April 15th 1975: Melanie Suzanne “Suzy” Cooley (18) – Cooley disappeared after leaving Nederland High School in Nederland, Colorado. Her body was discovered by road maintenance workers two weeks later in Coal Creek Canyon (20 miles away), she had been bludgeoned and strangled. While gas receipts place Bundy in nearby on the day she disappeared, Jefferson County authorities say the evidence is inconclusive and continue to treat her murder as unsolved.

July 1st 1975: Shelly Kay Robertson (24) – Robertson failed to show up for work in Golden, Colorado on 1st July. Her nude and decomposing body was found on 23rd August, 500 feet inside a mine on Berthoud Pass, Colorado. Again gas station receipts place Bundy in the area at the time, but there is no direct evidence of his involvement and the case remains unsolved.

July 4th 1975: Nancy Perry Baird (23) – Baird disappeared from the service station where she worked in Farmington, Utah. Bundy specifically denied involvement in this case during the death row interviews. Baird remains classified as a missing person.

Bundy was truely one of the worlds most monsterous people!! 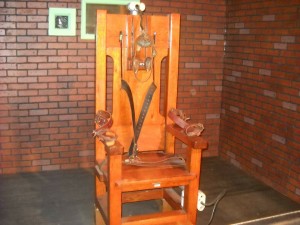